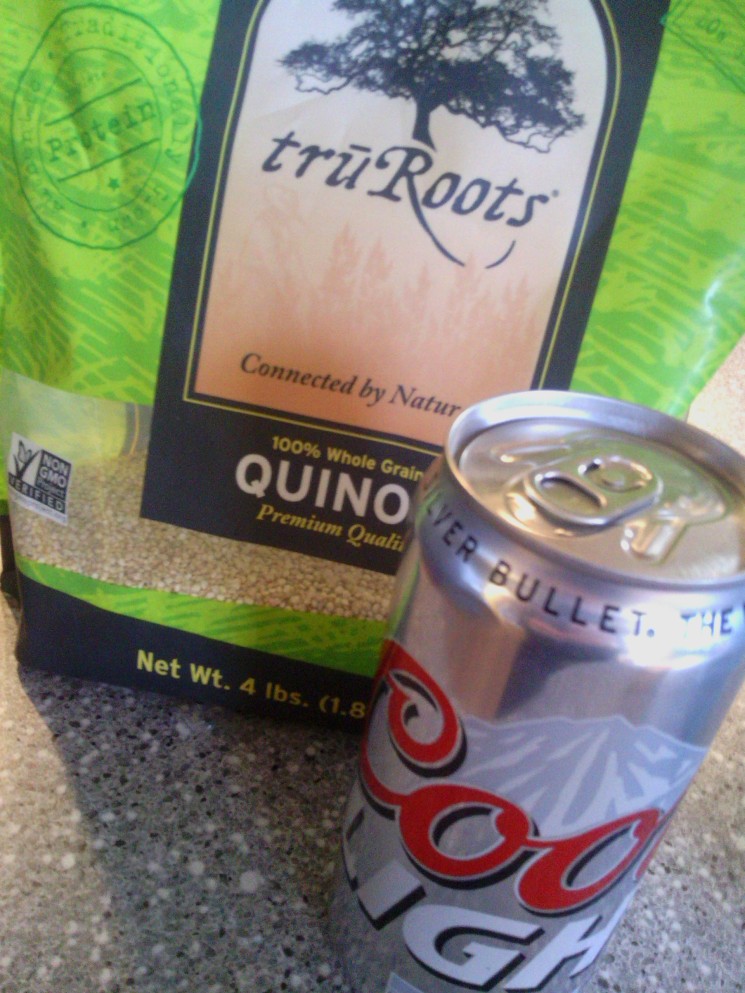 It all began with a beer.  That is how it all happened.  The beer met the Pork Roast and then I felt like they should get a yummy group of flavors going and the next thing you know, we had one outrageous combination on our table.   I had some purple and white pearl onions loosely rolling around in the crisper drawer and wanted to use them as well.  You don’t have to peel them, so that makes it easy!  I really wish I had made this when our house was filled with guests during the Holidays because it would have fed 4-6 people… Although, I would probably double the quinoa recipe if I was feeding 6 people.

This would also be great in your Slow Cooker. And remember my favorite Bruschetta Mix?  Well, I soaked it as instructed to make it moist and put that on some Roma Tomatoes,  sliced Leeks and Button Mushrooms before roasting them in the oven. After roasting, they are added to the cooked quinoa and it works pretty well with the pork.  Its a great winter dish!  You can use any kind of bruschetta either homemade or a favorite brand of your own from the market.

Recipe for “The Pearly Pork”

Directions:  Place the pork roast in a roasting pan.  Heat oven to 325.  Mix all the ingredients in a separate bowl and pour over the meat.  Cover with foil and bake for 1 1/2 to 2 hours until done.  Or just throw it all the slow cooker!  This sauce is so good…Serve with a hunk of crusty bread for dipping.

Recipe for “The Leeky Quinoa”

Cook the quinoa as directed. Heat oven to 400. While the quinoa is simmering, Place the veggies on a roasting pan and toss with bruschetta.  Roast in oven for approximately 10-15 minutes.  Once the quinoa is cooked, stir the roasted bruschetta veggies in and serve.